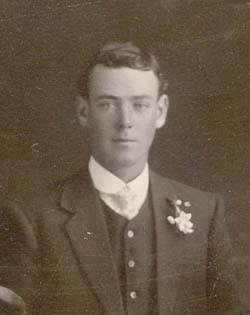 This story is about my Great Uncle Francis McMahon born 21 May 1894 in Tongala, he was the sixth child in a family of seven born to Thomas and Elizabeth [Alice] McMahon nee Cahill. Thomas was Irish and Alice was born first generation Australian to Irish parents. His parents baptised him at St Mary's Catholic Church, Echuca on 17 June 1894.

In 1906 at the age of 12 years Francis and his siblings were orphaned and the family was divided. Some of the older sibling had already left the home and were working and living in West Australia, NSW and Victoria the remaining younger children went to live with their Uncle John Cahill a farmer in Tongala Victoria.

Circumstances changed in 1910 and the remaining McMahon children were again divided with the youngest boy staying in Victoria with the eldest brother and Francis with his older brother William moved to Kellerberrin in West Australia joining his brother Edward [Ned], his sister moved to her Aunts in Melbourne Victoria.

Whilst living in Kellerberrin Francis was attached to the Fire Brigade as well as helping his brother Edward with his farming contracts on 14 April 1914 Francis was Best man at his brother Edwards wedding (this remains one of the two surviving photos known to have been taken of Francis). War had broken out in Gallipoli and a couple of months later recruiters were travelling out in the wheat belt areas looking for skilled horseman (some of which had their own horses) who could use a gun. Francis fitted the category! Stepping forward to fight for King and country, enlisting at Northam on 29 September 1914. 10th Lighthorse Trooper 89.

After completing his training at Blackboy Hill he boarded the troopship HMAT A45 Mashobra on 15 February 1915 Francis embarked at Alexandria for Gallipoli 16 May 1915 five days before his 21st birthday. After Francis arrival to Gallipoli he was treated for influenza as so many of the troops were, Francis returned to duty on 8 September 1915.

The battle on Hill 60 had not been going well and on the 21 August the first assault was made by the Australian 13th and 14th Battalions fighting under fire from Hill 60 and Hill 100 the infantry were decimated from lack of artillery and illness. The following day they were reinforced by the 18th Battalion and part of the newly arrived 2nd Australian Division.

Private Francis McMahon Trooper 89 of the 10th Lighthorse was killed in action on the third wave, 29th August 1915, at the Battle of Hill 60 alongside Lieutenant Throssall (who was later awarded the VC for his part in the campaign).

Whilst Lieuitenant Throssall was recuperating on the hospital ship Lemnos, he wrote a semi-private letter to his commanding officer of the 10th Lighthorse about the charge on hill 60. He mentioned four names for special distinctions, amongst which one was Private Francis McMahon Trooper 89, for his part in the offensive.

In his diary entry he mentioned no honour was too high. They held the extreme right of the trench from 1am when they took it until 7-7.30am. Lieutenant Throssall noted that the part of the trench was bombed continuously all night.

In his closing sentence he noted he felt the fact that they held the trench was due to the "...splendid courage and accurate bombing of these glorious men."

On Lieutenant Throssall's return to West Australia after receiving his VC he travelled around the country speaking about the campaign always mentioning my Great Uncle as follows in the Westralia Giftbook.

"On one occasion I called for another bomb thrower young McMahon from Kellerberrin came along...I asked him if he could throw bombs, he said he had never tried, but would soon learn. He did not wait for an opportunity... he found his tunic encumbered him, and peeled off his shirt. Then he stood there and threw bombs all night long until he fell in the counter attack in the morning...Young McMahon's end was tragic but Glorious, As the Turks were making one of their charges in the early morning we saw a German Officer picking up clods of earth and throwing them at the Turks...Ferrier and McMahon put their rifles up ...and shot simultaneously. One or both or both of them got him...McMahon said "It has been my ambition ...to get a German Officer." He rose up to get another shot and a bullet went clean through his head. As he fell back a Turkish bomb crashed into the trench and exploding over him, blew him to pieces.

Private Francis McMahon Trooper 89 name appears on the Lone Pine Memorial panel 10. After reading articles on the battle -- these young were brave and courageous fighting in a country a long way from home and country. It is hard to imagine fighting in a trench with your opponent only several meters away, throwing bombs back as they landed for over seven hours continuously with no break or reprieve...

In March 2007 Private Francis McMahon's extended family had a plaque placed in Kings Park in Perth in memory of our Great Uncle and his bravery...

Francis McMahon you were only a young sprightly lad
Orphaned boy working hard, no fun to be had
You left Uncle John's farm in your early teens
To W.A, joining Edward with his chaff cutting team
There was no spare time for you to have fun
Fireman, fighting bush fires in the hot sun
In Kellerberrin you heard the cry to the lads, sign up!
Fight for Queen and country, patriotically, you signed up

Seven days before you were being shipped out
Celebrated your niece Mollie's birth, with a shout
Gallipoli Turkey, was over the ocean so very far away
One brave Aussie boy headed to the shores of Anzac Bay

On arrival you were diagnosed sick with the flu
They transferred you to troop ship sweeper, then too
No time to celebrate your twenty first there
Amongst all the blood shed, carnage and despair

At last you were cleared for work and sent to fight
In the trenches on Hill 60, throwing bombs all night
At 7am tragedy struck, you were shot in the head
Instantly killed, mentioned in dispatches, a hero it said!

10th Light Horse Trooper 89, brave young Victorian Man
A hero in the eyes of your McMahon Family Clan
Never to return home to loved ones dear
Ninety two years on your family remembers you here.