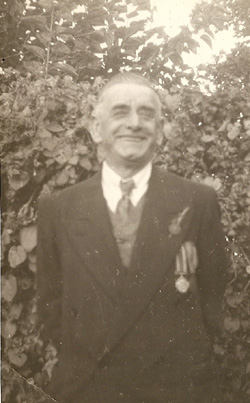 This is my story about my grandfather my hero. He served in the first world war in the 32nd Btn, enlisted May 31st 1916 at the age of 32.

He was wounded in action (gas) 16th May 1918. The time my grandfather was in France I cannot imagine how horrific it could have been-grandad crawled over to help another solider to safety under an attack, this was not recorded.

My grandad wrote to the Officer on 25th October 1922 as he assumed he was entitled to wear the Oak Leaf but was refused saying that no entry to the effect that you were mentioned in Despatches can be found.

I know that Grandad was bitterly disappointed.

My grandfather met my grandmother in a hospital while recovering from being gassed and were married on the 10th December 1919 at St James church Kings street Sydney and had two daughters while grandad was rehabilitating he learnt to make cane furniture he was a fine craftsman.

My Grandfather John Wallace Anderton is my hero.

Photo to the right is John Wallace Anderton.