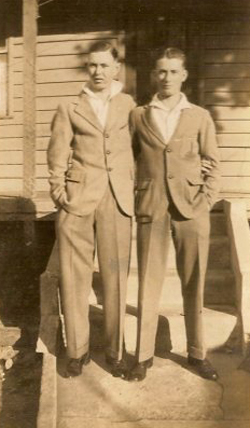 My uncle Alexander Anthony Quinn 1901-1943 enlisted in the Australian Army in WW2 as Alexander George Quinn using his older brothers WW1 enlistment as he was too old to serve. He served in the 2/12th Trainin Battalion and was sent to Singapore. He was captured and sent to Burma where he died in 1943. He is mentioned in Weary Dunlop's book on his experiences during WW2. The only photograph of Bert and Alex is one taken in the 1930's. Photo is of Bert and Alex.