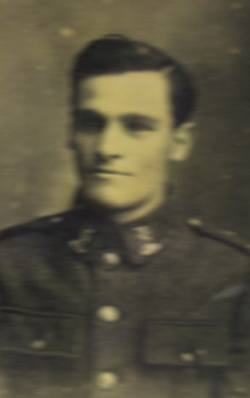 This is a photo of my uncle Harold. He was accepted for training in March 1917 and was transferred overseas in October 1917 and killed in action 6 months later. He was killed in one of the battles of the Somme on 05/04/1918, just before the First World War ended. He was 21 years old.

The 5th April 1918 was the last day of the final German offensive of the war and the NZ contingent fought them off but paid heavily. From what I gather there had been a lull in the fighting and he was sitting outside of the trench when he was killed by shrapnel from a sporadic outburst of gunfire.

His twin brother Percy (no photo) had enlisted some time before Harold and also fought at the Somme. Percy survived. Family rumour is that Harold tried to enlist the same time as his brother but was rejected due to a hearing problem. His medical records show that when he was finally accepted his hearing is recorded as "normal". I suppose by that time they were taking anyone for "cannon fodder".