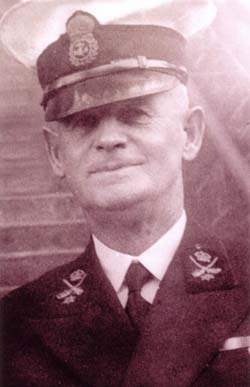 It is about 42 years of naval service to the Empire in both England and Australia the country Victor came to call home during peace and war time.

Victor Pegler Oakey was born in Liverpool, England on the 23 August I887 ,the youngest child of William Henry Okey of Stroud and Elizabeth Okey ( nee Jones) of Bristol. He had two brothers (William and Ernest) and a sister ( Esther ) ...Victor's father, was in the Royal Navy and served aboard HMS Royal Alfred, flagship on the North America Station moving between Nova Scotia and the West Indies.

On leaving the Navy, William married Elizabeth Jones and shortly after joined the police force in Liverpoo, later becoming Chief of River Police, Victor's brother Ernest was also in the Royal Navy for a short time. It is not altogether a surprise therefore to learn that Victor was also directed toward a career in the Navy, Victor's Naval records show that he commenced his Navy career aboard he trainings hip HMS Impregnable in Devonport in 1900, aged 13 ( this was about a fortnight after his mother's death in Gloucester. Victor left the Royal Navy in late 1911 as an Able Seaman. Some 20 months later he enlisted in the Royal Australian Navy in Melbourne in 1913, just ahead of the outbreak of World War 1.

In the midst of his settling into a largely familiar Navy role (albeit in a new country) Victor met ( possibly in Melbourne) and married Mary Ellen McMahon.

For the duration of the war Victor served as a Leading Seaman aboard HMAS Encounter. The Encounter was a light cruiser attached to the newly formed' Australian Naval and Military Expeditionary Force 'working to protect the shipping and the people around the Pacific Islands.

As a serving member of the Royal Australian Navy, Victor and his family found themselves living in a number of dwellings along the east coast including Williamstow in Victoria; Darlington and Redfern in New South Wales; and Kangaroo Point and Ashgrove in Queensland.

At war's end Victor followed through with his Naval service. From 1927 Victor was an Instructor in seamanship with the rank of Chief Petty Officer, a role he continued through to his discharge in 1937 (age limit 50).

World War 2 commenced in September 1939, and in response Victor re-entered the Royal Australian Navy Reserve in January1941 for 2 years or the duration of the war and 6 months after, whichever was the greater. In August 1946 Victor was discharged at HMAS Moreton, aged 59 years. His total recorded Naval career (RN, RAN and RANR) amounts to around forty-two years.

During Victor's years on the HMAS Encounter he was involved in the instruction Boxing and Wrestling class "Catch as Catch Can". Over the years he played an important part in the training of some of our naval forces that served under him...

Victor and his wife lived out the retirement years in Townsville he passed away 11 September 1964 in Townsville Hospital, Queensland Australia.