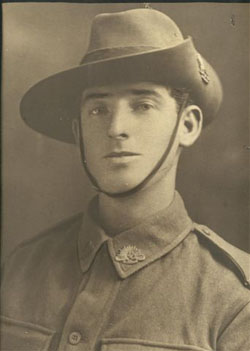 This is a story about two W.W.I soldiers from Casterton District. Their names were PTE. Albert Oliver Coulson -- No. 1259 (known as Bert) and CPL. Edgar Arthur Patrick Baugh -- No. 1239 (known as Paddy) 39th Battalion. These two soldiers were part of a group of Casterton District boys who enlisted and tried to stick together.

The 39th Battalion was formed on 21st February 1916 at the Ballarat Show-grounds in Victoria and drew most of its recruits from the States Western District. It became part of the 10th Brigade of the 3rd Australian Division. Sailing from Melbourne on 27th May, the battalion arrived in Britain on 18th July and commenced four months training. It crossed to France in late November and moved into the trenches of the Western Front for the first time on 9th December, just in time for the onset of the terrible winter of 1916-17.

On the 4th October 1917 at Ypres, in Belgium, Bert and Paddy were in a trench that had been cut off from the main battalion by German troops. They had been there for some time and food and water were running low and the situation was getting desperate. Paddy who held rank in the trench being a Cpl., due to a field promotion that is not shown in military records, decided to take a look to see if the coast was clear. They put their helmets up on rifles a number of times but drew no response from the enemy so paddy put his head up to take a look around. The sniper in a far off tree did not miss and Paddy fell back into the trench beside his mate. Bert held him in his arms for he knew that it was bad and Paddy passed away. He was just twenty-two years old. Eventually reinforcements came and Bert and his company got out of the trench to fight another day. Paddy was buried in an unmarked grave. His name is on the Ypres (Menin Gate) Memorial.

Bert later married and had children, his daughter then gave him a grand-son. Paddy's niece also went on to have a daughter.

The years rolled by and these to young people met and married and produced a family of their own. Their blood lines are now entwined and Paddy and Bert's photos are side by side in the couple's home.