New Zealand: Its Emigration and Gold Fields (1853).  "The object of the following book is to supply intending emigrants with the information requisite to enable them to effect their purpose certainly and economically, and at the same time to give them such an outline of the colony to which they are proceeding, as may reasonably assure them as to their future prospects when arrived at that Colony."

The author outlines why people should emigrate and ends to be obtained by emigration:

the intention of this little work is to awaken the middle and labouring classes of this country to a sense of their own position with respect to the future, as regards this country, and, at the same time, to point out to them the way to escape from that future, whilst they have either small capital or strength to labour left.... he and his family, though in a distant part of the empire, will ascend in the social scale; whilst he will be a means of preventing many of those whom he leaves at home from sinking. 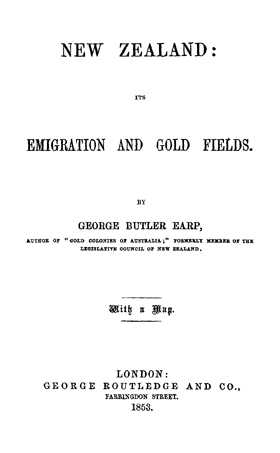