This index does not cover Timber Licences or Goldfields Miners Rights, Miners Licences and Business Licences which appeared in the Gazette during this period. Indexes to these types are separate data collections within the database.

In general, little additional information is given in the Gazette though the early Auctioneers licence listings also gave a description of the licence (General or District). Sometimes the licence may have been issued earlier than is apparent from the date of the Gazette (if several months of licences were forwarded in a single batch for publication) and in these cases reference to the Gazette will reveal the month of issue. On a few occasions the licence has been gazetted in the incorrect name and this has been noted in a later listing. In some cases additional information is available for licences issued in joint names. 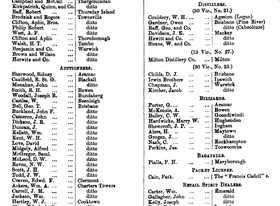