This database provides information on the employees of the Ipswich and Rockhampton Railway Workshops at the time of the rail dispute in May 1879 - prior to the commencement (in 1889) of the regular publication of lists of persons employed in the railway service. This database lists 447 entries.

A total of 140 men from a workforce of 455 were discharged - 109 from 382 at the Ipswich Workshops and 31 from 73 at the Rockhampton Workshops. [Although the list in Votes and Proceedings of the Legislative Assembly during the Second Session of 1879 indicates the number of employees on 1st May 1879 at Ipswich was 382 the count of those listed is actually only 328; the other totals are correct] Various allegations were made as to how those to be dismissed were selected - creed, political considerations, member of trade associations - the official view was that extensive reductions were necessary because of economic considerations.

The following information is included:

Wide coverage of the dismissals was made in the local newspapers. The extracts below indicate the views of the various parties: 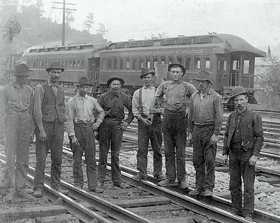