This database indexes the lists 68,458 applications for timber licences which appeared in the Queensland Government Gazette between 1860 and 1901. Although called Timber Licences, for most of the period from 1860 to 1901 they covered several kinds of licence.

Depending on the year, applications were made to the Crown Lands Office, the Court of Petty Sessions or the Land Commissioners (from 1877) in the district in which the licences were to be used. Returns of the applications were published from time to time in the Queensland Government Gazette. Normally the returns included the name of the district, the name of the applicant, type of licence, whether granted or refused, and amount of fee received. The index includes all the above information as well as the date and page reference of the Government Gazette in which each entry was listed

Some lists contain additional unindexed information - for example, the civil condition of the applicant, the term of the licence, the grounds of refusal, the nationality of the applicant, or the month and year that the licence was granted. Provisional licenses include a description of the situation and area of the land in addition to the district, and licensee. The listing of timber licences in the Queensland Government Gazette appears to have ceased in April 1901. 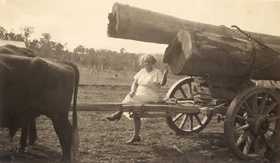