Almanacs and directories are a valuable resource for local, family and social historians as well as for researchers in other fields of Australian history. This one particularly so, because it is so early.
The Province of South Australia was proclaimed on 28 December 1836, so this early almanac and directory gives us an insight into life in the young settlement. Listing 'principal merchants and inhabitants' from Adelaide and Port Adelaide, these are arranged alphabetically by surname, and each entry lists occupation and address.

The full title explains a little more as to what is included: "Royal South Australian Almanack for 1839: Containing a daily calendar, a gardener and farmer's directory, a list of government officers, the addresses of the principal merchants and inhabitants, and all useful information regarding the province of South Australia". This is a valuable resource for early South Australia and its settlers.

Officially titled The Royal South Australian Almanac and General Directory for 1845 (Allen, James) this small, but useful, book contains the names of people who were in South Australia in that year. The Almanac contains a range of useful information on various statistics, Acts, information on the geography of South Australia, together with Justices of the Peace, charges for licences and more. The Adelaide Directory section list names alphabetically by surname, together with their occupation and street address.

The South Australian Almanac & Directory 1851 (A. Murray) is a rare early almanac and directory, and gives a fascinating insight into the South Australia of 1851. It also contains a great deal useful information for the researcher, not just local, family and social history.

Some of the subjects included:

An important part of this volume is the directory, which is divided into three sections: Adelaide and Suburban, Albert Town and Port, and Country. The many advertisements included make for fascinating and informative reading.

The South Australia Almanac & Directory 1865 (Boothby) is a detailed directory and almanac of nearly 450 pages includes much fascinating information. Divided into various sections this book begins with an index for the almanac section, followed by two calendars, one for farmers, and another of 'remarkable days', with a noted event written for every day of the year. Statistics such as population, immigration and BDM's are included here.

The second part contains the Government and Official Directory followed by the Ecclesiastical, Municipal and Societies Directory, the Mercantile Directory and the Trades index. The major part of this publication is the Town and Country Directory listing residents town by town, together with their occupation and address. The final section is 100 pages of advertisements, many of which are illustrated.

The South Australian Directory 1867, 1876 & 1881 (Boothby) consists of hundreds of pages of directory listings and advertisements, many of which are illustrated. Divided into several sections the first part consists of a directory of Adelaide listing residents in each street. The next is an alphabetical directory of people and their occupations. Then comes the Government and Official Directory followed by the Ecclesiastical, Municipal and Societies Directory. Then the Mercantile Directory which is followed by the Trades index and then the fascinating advertisements. 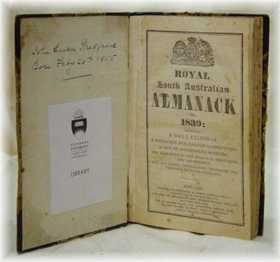