The Tasmanian Royal Kalendar & Almanack 1849 (Wood) is an important reference book on early Tasmania. It consists of 255 pages jam packed with all kinds of information relating to Tasmania, and also the world as it was in 1849. The alphabetical table of contents alone covers 9 pages of subjects covered.

To note just a small sampling of these:

The Tasmanian Royal Kalendar & Almanack 1850 (J Wood) is perfect for your social history, as this publication gives you details on the stage coach fares, details of newspapers publishing in the Australasian colonies, details on all the lodges and societies, shipping owners, as well as arrivals and departures, religious statistics, shipping agents, wholesales dealers, auctioneers and pawnbrokers. There is a gardening calendar, to know what to plant when, as well as a 'Home Directory' which contains details of the Sovereigns of England. This issue also includes a 'Tasmanian Official Directory' which gives lists of names, positions and salaries of government officers: government, banking, insurance, education, police and convict department, military, ministers of religion and many more.

It contains an immense amount information, both for the genealogist and historian. If you had ancestors in Tasmania in 1850 they may be listed here, together with their occupation, and salary. Apart from that, you can find out about the society they lived in, the local businesses (which includes 40 pages of advertisements), banks, transport, postage costs, churches, government offices, medical facilities and so much more. Part of the introduction to this publication states that it is "... a work which, for the abundance and variety and accuracy of its information, is by far the most useful ever issued ..." 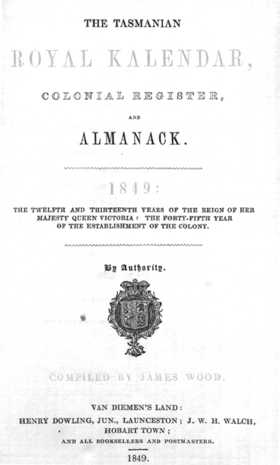