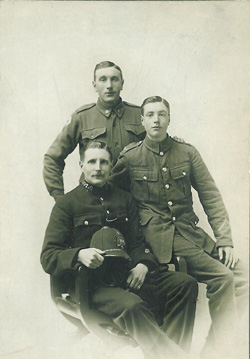 My great uncle Arthur Edmond Haggar was born in Hackney, London on 5th November 1888. He was the 5th of 8 children of Charles Joseph Haggar and Eliza Ann Hooker. By the 1911 census he was a barman; prospects were not great and he found work as a crewman on the SS Omrah, travelling between England and Australia. The ship docked in Sydney on 16th January 1913; I was told that he absconded to start a new life in Australia. Less than 2 years later on 19th December 1914, Arthur volunteered for the Australian Imperial Force (no. 5476). His military service is evocatively summarised in a letter written by his wife Ethel to the Army Records Office in October 1919. I quote;

I am applying for the ANZAC Commemorative Medallion & Lapel Badge for my husband, whom is a T.P.I. still living but is unable to concentrate.

He joined the AIF in December 1914 at Victoria Barracks Sydney NSW, ref no. 5476 Driver Horse Transport 6th Company AASC 2 Light Horse Brigade Train. After two months training left Australia for Active Service overseas on the SS Runic, after landing in Egypt he was stationed at Mardi near Cairo with the 2nd Light Horse Brigade 5th -- 6th -- 7th regiments travelling daily to the Citade Cairo for stores rations and small arms ammunitions for the camp.

He landed at Gallipoli May 19th 1915 at Brighton Beach and was on escort duty with the mule teams carrying supplies of all descriptions daily to the men in the front line trenches and was evacuated December 19th 1915 (my husband full name is Arthur Edmund Haggar). After he was transferred from Alexandria to France to the Armentieres & Ypres Front where he remained on active duty where he collapsed and was invalided to England landing at Dover end of December 1916 then by Hospital Train to English Hospital at Guildford then transferred to Australian Hospital at Southall London, where he was boarded as Medically Unfit for any further overseas service so was passed for Home Service where he remained up till 31st 3rd 1919. I may state my Husband receive a Silver Medical unfit Badge also the 1914 15 Star.

Thanking you Sir in Anticipation
Yours Faithfully
Ethel E Haggar'

Arthur's service record is by no means exemplary, with numerous minor misdemeanours (overstaying furlough, obscene language); but most of these occurred after he had been invalided back to England. The medical records are inconclusive about the severity of his injuries, focussing on impaired eyesight and myalgia. However there are two far more telling references almost 'hidden' in the files quoting possible shell shock and the fact that Arthur quotes that 'he was buried by a shell explosion in Gallipoli in Oct 1915'. Who knows what he really suffered, but having served in both Gallipoli and the Western Front I am not surprised that he was permanently incapacitated.

While serving in England in 1917/18 Arthur was able to meet up with his family. I enclose a photo taken on 1st January 1917 of Arthur (in rear) with older brother Charles Edwin Haggar, a police constable and younger brother John (Jack) Haggar, who was on leave from France. On 3rd May 1917 John Haggar was killed at Arras; he is remembered at the Arras Memorial, one of almost 35,000 casualties with no known grave.

In May 1919 their father, Charles Joseph Haggar, enlisted in the Labour Corps and spent the next year posted to France for grave exhumation. On his Attestation Form he gives his age as 58; he was in fact within a few weeks of his 63rd birthday. I don't know what motivated or drove him to volunteer for such a tough assignment; I think the loss of one son and incapacitation of another must have been a factor.

Arthur returned to Australia with his wife Ethel in 1919 where he lived for the remainder of his life. In 1939 Arthur enlisted at Moss Vale, NSW, presumably for a home defence role. It's not clear whether he ever fully recovered.

I am so thankful that I have not had to live through or serve in the type of conflicts that Arthur and his family endured.