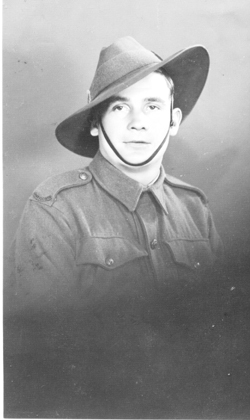 Douglas spent a lot of time with his cousin, Lou. Two days after Christmas Day in 1941, emboldened by each other's devilry they fell through the door of the Gawler Army enlistment office. Lloyd was later to say that he enlisted because he "thought it was a good idea at the time". On January 2nd 1942 the army passed him as medically fit enough to shoot Japanese soldiers and on the 12th of January at Wayville Show grounds Lloyd took the oath of allegiance and was officially welcomed to the army's 2/10th Battalion (Rifles) with the serial number SX 16245.

On June 6th 1942 Lloyd was "entrained to New South Wales. Discovering that many of his mates had volunteered for commando training Lloyd decided that this too was a "good idea at the time". By June 11th 1943 Lloyd was afflicted with his first case of malaria and was transferred to Bena Camp Hospital. Five days later he was back with his unit and then on the 25th of September 1943 he was promoted to the rank of acting Corporal.

By the 21st of October 1944 Lloyd was back in New Guinea, now at Aitape. By the Middle of November the 2/7th were relieved by 2/4th and they were able to move up to a new line of communication from Nialu to Tong where friendly natives Provided long supply trains to get equipment and food to the troops. From here the 2/7th forced the Japanese from the villages and into the remote mountains and they captured the villages of Yambes.

On the 19th of January 1945, Lloyd was once again evacuated to the squadron hospital with Malaria. Not long after his recuperation on the 1st of February 1945 he had his acting rank of Corporal confirmed. Three weeks later he was back in hospital this time with Tonsillitis and then again in the June of 1945 Malaria returned.

Just over two weeks after he was demobbed, Lloyd married Roma on April 20th 1946 in St. Peter's and Paul's Catholic church Gawler.