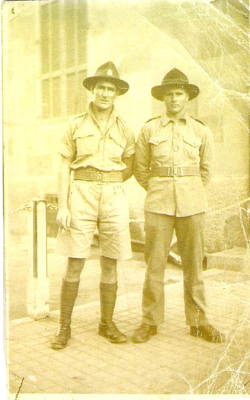 My father was stationed in the middle east during the WWII and served in the medical corps, so was one of those wee chaps you see on the movies patching everyone up while guns and bombs are going off all around!!. Although it wasn't a pleasant job, it was nonetheless very important in the survival of the men that served.

Most of his time was spent in Egypt, and though not sure of his exact whereabouts at times as it was top secret, he spent most of his time near the enemy lines tending the wounded. After the battles were over he had the terrible task of matching up arms and legs blown off to the appropriate torso.

One will never know the terrible things these men had to endure all in the name of serving for one's country. His favourite story was about when they were hungry in the desert they used to catch rats and cook them up and feel like they had eaten a banquet! They tasted very similar to chicken and became quite a delicacy for the men.