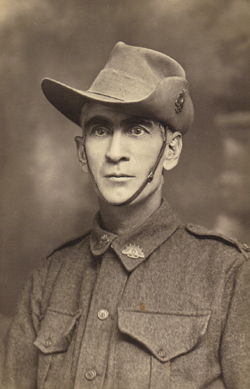 William John Howard was born in Yambuk, Victoria on December 11th 1868. He had five older sisters & a younger sister & brother. His mother doted on him & fussed over him greatly. When William was about 4 years old the family moved to Colac, after William Snr lost his job as Yambuk Station manager. They weren't there very long when William Snr packed his swag & left "to look for work". He was never heard from again.Sarah did her best to raise her family alone. They lived for a time at Echuca, where Sarah worked as a midwife & a teacher.

Not much more is known of William's younger years. He worked in Melbourne as a painter for 5 years, then he left the family & travelled north. He was an excellent horseman & worked on properties as a farmhand & stockman. He never married & was working for a Mr. J. Palmer at Richmond River, Sth Woodburn, New South Wales at the time of his enlistment in the Army.

William John Howard was 46 years old when he enlisted in Brisbane on 15th July 1915. The maximum age for enlistment at that time was 45. William wasn't going to let a little thing like being too old stop him from "doing his bit", so he created a new identity & Jack Morley aged 44 from Calcutta went off to war!

He was in A Coy. 31st Batt. & left Melbourne on the HMAT Wandilla on the 9th Nov. 1915. They arrived in Suez on Dec. 7th. for more training. On April 23rd 1916 Jack was "awarded an extra duty" by Capt. G. Robertson for "being improperly dressed on parade. Unshaven".

The troops left Alexandria on June 16th & arrived in Marseilles on June 23rd, where they proceeded to the Western Front. The 31st Batt. took part in the Battle of Fromelles on the night of July 19/20 1916. Jack was reported "missing in action" & later declared "killed in action".

For 93 years Jack had no known grave. We now know that he, along with many more of his Digger mates, were buried in mass pits by the Germans at Pheasant Wood. They have at last been given the proper, dignified burial that they all deserve at the new Pheasant Wood Military Cemetery, Fromelles. Many, including Jack, have named headstones, while many remain as "Known Unto God". May they now all Rest In Peace.

Photo below of Jack's message 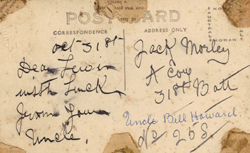