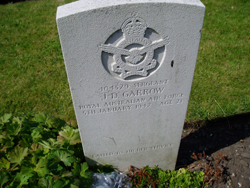 He was just over 21 when he died (which is a very young age).

He actually joined the airforce at 17years and 11 months. From what I found from the National Archives he was a member of the R.C.A.F. Squadron 405 based at a place called Pocklington (I have enclosed a couple of pictures of the memorial there but unfortunately no mention of Australians on this memorial). I have also enclosed photo of the War Graves at a church yard about 2 miles from Pocklington called St Catherine, Barmby-on-the-Moor.

The section of war grave are very well looked after and have many nationalities buried there all pilots or aircrew from Pocklington. I also visited the place where the airbase was and talked to a man (who was a boy at the time but has a great memory) about the base.

To keep the place going they now have gliders using the runway. It is not a big place but he told us how they used to have gates that closed the main road whenever the planes took off or came in to land. He also remembers a couple of houses having a wing or an engine drop in on them.

I am so glad I visited both places as now I feel closer to someone I only heard about and now to me like so many others was very brave. I do hope the photos I have attached will be of help to you. I also enclosed some from inside the (what used to be the Mess I was told) main building. They call it the memorial wall. 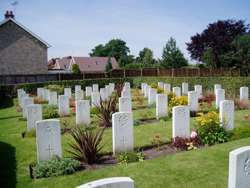 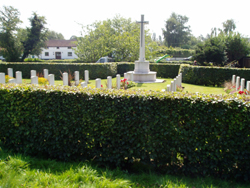 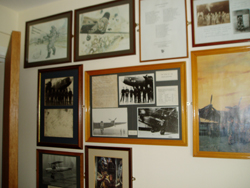