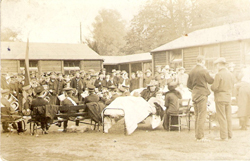 My Grandfather, Ernest John Ing served in the Royal Engineers in WWI and was wounded at Ypres in April 1918.

My husband's Grandfather, William James Easden received fatal injuries in Flanders in 1917. As he knew he was dying, he asked his brother to marry his wife as she had a young family, which he did.

The photo is of some ANZACS recuperating at Harefield Hospital, Middlesex, listening to the Uxbridge Salvation Army Band. The only name I have is that of Bill Lee who was conducting the band.