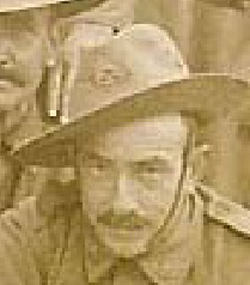 Adam Robert Black was the second son and third child of Adam and Jane Margaret Drummond Black, and born at North Quay in Brisbane after the family moved from Gympie en route to Beenleigh. He was around 4 years of age when the family moved back to Gympie in 1877.

Following the Scottish tradition of naming, Adam’s names are taken from his father, his middle name Robert is likely to be taken from his grandfather Robert Barlow. (The first child of Adam and Margret - George Barlow received George from Adam’s father and Barlow from Robert Barlow, Marjory from her paternal grandmother.)

As shown on the AIF Project record, he went to the Gympie State School, and (possibly) Grammar School, Brisbane.

At age 11, he was made Trumpeter to the Gympie Mounted Infantry, Queensland Defence Force, and served for three years.

He enlisted on 17 November 1915, just two weeks before his 42nd birthday, in Brisbane.

The following information is contained in his military records, obtained from on-line AIF records (as at 17 November 1915).

His unit, the 42nd Battalion, B Company based at Enoggera Brisbane, embarked from Sydney on board HMAT A30 Borda, on 4 June 1916. They disembarked at Southampton 23 July 1916.

Here is a record of his activity overseas:

Other records show that he was wounded in action (gunshot wound right buttock, gassed), repatriated to England, and then returned to France.

France Nov 26 1917. Dear Madge - Just a few lines hoping yourself, Arthur Margie and Bob are in the best of health, and to let you know I am keeping well. Thanks for the ‘Week’. I am getting it pretty regularly now. How is Norm getting on? Remember me to him. Best love from your affect. bro Bob.

France October 6, 1917. Dear Madge (ie Marjory) - I received your letter the other day & was glad to see that you all were keeping well. I am in good nick again myself. Thank Arthur for his “Week”. I am getting it pretty regularly now. I wrote a letter to your old address while I was in England, I hope you received it. Bill Corry has gone back to Australia with a smashed arm, he will be able to give you all the news about these parts. I got a letter from Norm & was pleased to hear from him. Tell him I’ll write a note in a day or two. The weather is starting to get cold & wet again now. Now Madge, I will say goodbye for the present, hoping yourself, Arthur & the little ones are well, & hoping to see you all before long. I remain Your affect. bro. Bob

Bill Corry mentioned above also left Australia on the “Borda” in 1916, and was in the 42nd Battalion. His military records showed his mother living at Stanley Lane, Gympie, just a stone’s throw from the site of the original New Zealand Mine and Maori Battery, and the next street over from Crown Road, where Adam lived. Perhaps related to Joe Corry publician, an associate of Adam Black.

The 42nd Battalion was raised at Enoggera, on the outskirts of Brisbane, in December 1915 and became part of the 11th Brigade of the 3rd Australian Division. Due to sharing its numeric title with the famous Scottish regiment the Black Watch, the battalion became known as the “Australian Black Watch”. This association was recognised with a bagpipe band.

After training in Australia and Britain, the 42nd deployed to France on 26 November 1916 and entered the frontline for the first time on 23 December. The winter of 1916-17 was horrendous, and the 42nd spent much of it in the front line, the remainder being spent alternating between training and labouring in the rear areas.

In 1917, the operations of the 3rd Division were focussed on the Ypres sector of Belgium. The 42nd participated in major battles at Messines on 7 June, Warneton on 31 July, Broodseinde on 4 October, and Passchendaele on 12 October. Even though the battalion was in a reserve role, the battle of Passchendaele proved particularly costly. It lost over a third of its strength, principally from German gas attacks, and trench foot caused by the sodden condition of the battlefield.

Belgium remained the scene of the 42nd Battalion’s activities for the next five months as it was rotated between service in the rear areas and the front line. When the German Army launched its last great offensive in March 1918, the battalion was rushed south to France and played a role in blunting the drive towards the vital railway junction of Amiens.

(It was early in this last mentioned offensive that Adam was killed.)

There are ten eyewitness accounts of his death recorded in the Red Cross Missing & Wounded records. Here are several of those reports. He was nicknamed “Blackie” by his mates.

He is buried in the Heilly Station Cemetery, Mericourt L’Abbe, France.

The 36th Casualty Clearing Station was at Heilly from April 1916. It was joined in May by the 38th, and in July by the 2/2nd London, but these hospitals had all moved on by early June 1917. The cemetery was begun in May 1916 and was used by the three medical units until April 1917. From March to May 1918, it was used by Australian units, and in the early autumn for further hospital burials when the 20th Casualty Clearing Station was there briefly in August and September 1918. The last burial was made in May 1919. There are now 2,890 Commonwealth servicemen of the First World War buried or commemorated in this cemetery. Only 12 of the burials are unidentified and special memorials are erected to 21 casualties whose graves in the cemetery could not be exactly located. The cemetery also contains 83 German graves. The burials in this cemetery were carried out under extreme pressure and many of the graves are either too close together to be marked individually, or they contain multiple burials. Some headstones carry as many as three sets of casualty details, and in these cases, regimental badges have had to be omitted. Instead, these badges, 117 in all, have been carved on a cloister wall on the north side of the cemetery.

He left his personal estate to his youngest brother Norman.

These were forwarded from London to Norman Black, Crown Road, Gympie per the ship “Barunga” on 21 June 1918, but never reached Norman. The “Barunga” was sunk en route to Australia.

It is interesting to note that “photos” were included. The only photos of Adam or his family located so far are the ones shown here, so it may be assumed that the photos he had were others of his family.

Photo to the right is of Adam in uniform

Photos below (clockwise from left): Adam is front row, second right, John Black - taken about 1898 - that would make Adam approximately 25 years of age, This photo was provided by Trevor Rose, the grandson of Adam Robert Black’s sister Marjory Rose. A comparison with a photo of her husband Arthur Rose taken in later years has similarities, so the other man in the photo may have been Arthur, close up of previous photo, record of his wound, Adam is front row, second right, The photos below of the postcards were sent by Adam to his sister Marjory. The embroidered cards were made by women in the French villages and sold to soldiers to earn some much needed money in those difficult years, Postcard - France Nov 26 1917. Dear Madge – Just a few lines hoping yourself, Arthur Margie and Bob are in the best of health, and to let you know I am keeping well. Thanks for the ‘Week’. I am getting it pretty regularly now. How is Norm getting on? Remember me to him. Best love from your affect. bro Bob., letters informing of death 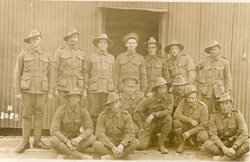 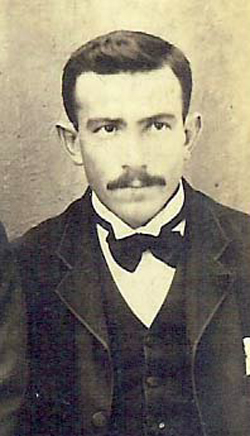 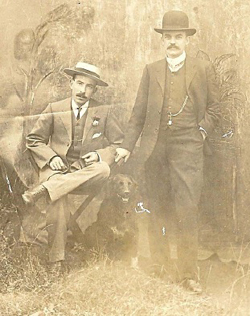 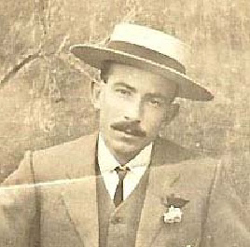 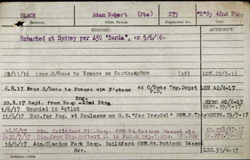 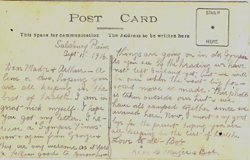 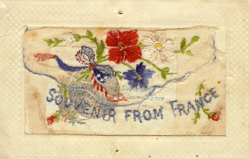 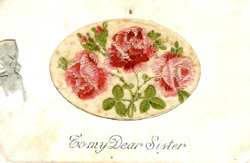 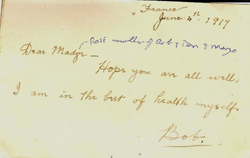 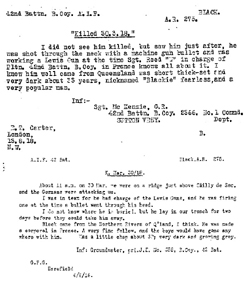 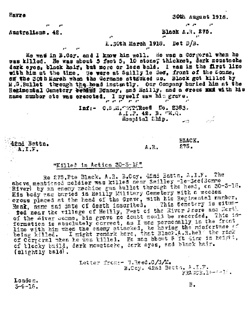